Every February, America collectively parks in front of the television to watch the Super Bowl. Whether or not they see a great game is unpredictable, but one thing they can always count on is a barrage of insurance commercials.

The multi-billion dollar advertising battle between insurance heavyweights is well fought, as their respective advertising agencies do an always-impressive job of creating narratives that make you feel like a big insurance company is your best friend. But, at the end of the day, advertising is advertising.

It’s not necessarily meant to deceive, but it’s also not meant to spotlight the business strategy happening in corporate headquarters. And from an insurance agent’s perspective, it’s cringe-worthy to think that consumers might be buying or “bundling” their life insurance based off these ads.

Are you considering buying life insurance from a “big-box” insurer? Here are 8 reasons to think twice before doing so:

1. A Bundle Deal Won’t Save on Life Insurance

Life insurance rates are standardized and regulated at the state level. Each state’s insurance commissioner is responsible for ensuring that all providers are charging the same rates, with no preferential treatment.

When a company advertises life insurance at a seemingly unbeatable price as part of a bundle deal, what they’re really doing is applying a discount on auto or home insurance to compensate for what is traditionally the weak link in their repertoire.

Put simply, there is no such thing as discounted life insurance. Bundling is an “upsell” marketing strategy to make you increase both your commitment and cost of coverage.

Consumers migrate to big brands, whether it’s out of comfort, social influence, or brand loyalty. When you see a national campaign spotlighting your trusted insurance provider, it evokes a sense of superiority.

In terms of life insurance, though, every big-box insurer is selling the same coverage.

Kraft mac and cheese might be better than the store brand, but one insurer’s coverage is not better than the other’s. It’s all about the duration, amount of coverage, and finding the best price for combinations of the two.

3. Their Ad Spending Trickles Down to Your Wallet

All of that Super Bowl ad spending has a trickle-down effect on your rates, and ultimately, your wallet. When a company spends billions of dollars on advertising each year, their bottom line is tighter, and thus their rates are higher.

Even if you are in the top rate class, referred to as “Preferred Best” or “Preferred Plus,” you can still expect to overpay by roughly 30 percent with a large insurer.

Meanwhile, smaller insurers—thousands of them across the U.S.—are insuring millions of Americans with quality coverage at affordable rates. Take for instance Banner Life Insurance, an A+ rated carrier that we at JRC continue to recommend with confidence.

They spend virtually no money on advertising, while companies like State Farm spent more than $1.17 billion on their advertising in 2020. This allows companies life Banner to remain one of the lowest cost providers out there, oftentimes even for people who aren’t in optimal health.

4. Their Underwriting is Not Competitive

Here are the actual underwriting guidelines for the “preferred plus” rate class from State Farm compared to company like Banner. 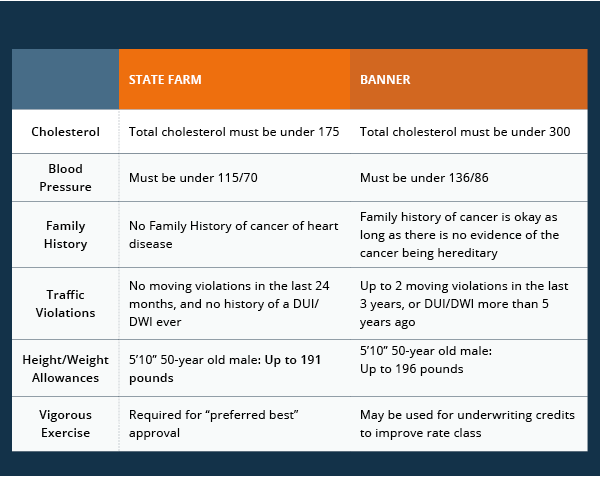 It’s important to note that neither of these companies have ever failed to pay a valid claim, both have a “Superior” financial rating from AM Best, and both company’s life insurance clients are protected by the Central Guarantee Fund. Banner started as Legal and General in 1836, State Farm was founded in 1922.

5. Their Coverage Isn’t Ideal for the People Who Need it Most

For those who neglect life insurance, aging into your 50s or 60s can be a major wakeup call. Meanwhile, the big-name companies you might be tempted to turn to will charge exorbitant rates—if they will approve you at all.

We get calls from clients every day saying they were told they couldn’t be helped because of some combination of their age, health, and budget. Most of the time, we find that these clients are insurable at an affordable rate after all, even if they have a major health issue.

6. Life Insurance is Not Their Priority

We alluded to life insurance being a “weak link” in an insurance bundle. That’s because most insurance companies have specialized primarily in home and/or auto insurance for decades. Life insurance is more of a commodity to them as opposed to a core service.

On average, a local big name insurance office might sell 10-20 life insurance policies per month. Therefore, their agents’ relevant exposure and experience is far below that of an independent agent who specializes in life insurance and sells that many policies in a week.

To make matters worse, since they don’t sell a lot of life insurance, big-box agents can’t help but see dollar signs when a client shows interest. That’s nothing against their character; it’s just the nature of their livelihood. As a result, they may try to sell you a hot-pick, higher-commission product, such as indexed universal life insurance, which can bear a major risk for you as a consumer.

7. Corporate Politics Are at Play

The insurance industry is filled with corporate bonuses and kickbacks—they’re just a part of the business at that level. When a company feeds a majority of its business to another larger company, they receive a bonus.

The same goes for the agents themselves; they’re rewarded for writing business with certain partners. While this isn’t an area of clear wrongdoing, consumers should be aware of what might be going on behind the scenes.

8. Their Agents Are Captive

No, their agents are not being held captive in their cubicles. The agents are actually called “captive agents,” meaning they can only shop and sell for the company they’re employed by.

Captive agents face pressure from upper management to meet sales objectives. In some of the more competitive call centers, they have to sell 20 policies per week (which many of them struggle mightily to accomplish) in order to keep from losing privileges and leads.

The insurance industry expects an estimated 15 percent turnover rate over the next decade. It’s relatively safe to assume that many of those professionals who leave their jobs will be burned-out and fed-up agents.

This article is in no way meant to be an assault on big-box insurance agencies. They carry proud names, serving and employing many Americans. But when it comes to life insurance in particular, you can’t help but notice that it just might not be their strong suit.

Big insurance companies survive on volume. Their agents don’t always have the time or interest to understand your needs, which is a disservice to you as a client. Life insurance is about the farthest thing from a “one-size-fits-all” product. Different carriers favor different types of clients, and it takes a great deal of legwork to survey your options and find the best rates.

That’s where JRC comes in. We are your friend in the insurance industry, an independent agency shopping 50+ different carriers to meet your unique needs. Call us today at 855-247-9555 to speak with one of our friendly and helpful agents, or get a free life insurance quote online within a few minutes.

Jason offers more than a decade of life insurance experience to JRC where he is a co-founder and managing partner. He specializes with helping clients who are considered a “high risk" for life insurance by finding the most affordable options for coverage available to them. Outside of work, Jason enjoys surfing, traveling, and spending time with friends and family.

Leave your question below and one of our insurance agents will give you a detailed answer.