Yesterday, I witnessed one of the most despicable insurance advertisements I’ve ever seen.

Many of you saw it…

… the Nationwide commercial featuring a boy who dies of accidental death, during the Superbowl game between the Patriots and Seahawks.

As a parent, images like this will be scarred into my memory forever:

By no means do I condone this commercial, but I will say this:

Nationwide is not alone.

After 10+ years in the life insurance industry, I never cease to be amazed at the depths insurance marketers will crawl down to in order to make a few more sales.

Over the years, I’ve saved some of the most inappropriate insurance advertisements I’ve seen.

… if you think Nationwide’s commercial was distasteful, there’s a lot more where that came from!

#1 – Nationwide Kills a Child in Their Superbowl Commercial

This aforementioned commercial is my #1.

If you have not yet seen it, the commercial featured a little boy who is naming all the things he won’t be able to in life, such as learning to ride a bike, or travel the world, or get married.

He says, “I couldn’t grow up, because I died from an accident.”

The commercial then proceeds to show horrific images of accidental child death scenes, such as a TV smashed on the ground, cabinet doors opened in the kitchen with bottles of poisonous chemicals inside, and a bathtub overflowing with water.

The voiceover then says, “At Nationwide, we believe in protecting what matters most… your kids.  Together we can make safe happen.”  #makesafehappen

In a statement today, Nationwide said the following, as quoted by the Columbus Dispatch:

“Preventable injuries around the home are the leading cause of childhood deaths in America. Most people don’t know that. Nationwide ran an ad during the Super Bowl that started a fierce conversation. The sole purpose of this message was to start a conversation, not sell insurance. We want to build awareness of an issue that is near and dear to all of us — the safety and well being of our children.”

Sorry Nationwide.  I see what you were aiming for, but this was way over the top, and I’ll be hoping to see an apology from you in the coming days.

While they may get great deals for their clients, they made a huge marketing mistake in July 2014, which was at best described as insensitive, and at worst, predatory.

Within hours of the news breaking that the Malaysian Airlines flight MH17 had been shot down over Ukraine, Lisa Group (overcome with sadness) used this tragedy opportunity to prey on Google visitors by purchasing the keyword “Malaysia Airlines” in Google Adwords.

Many people would have Google searched “Malaysia Airlines” in the wake of the disaster, and when they did, they would have seen Lisa Group’s ad saying, “Is MH17 Malaysian Airlines tragedy a sign to consider life insurance? In their defense, Lisa Group did quickly remove the ad as soon as they were “made aware” of it, blaming its placement on their overseas partner.

Sure, Obamacare is great for people who can’t afford health insurance.

But that’s not the only angle the Thanks Obamacare campaign featured in Colorado to promote affordable health coverage to young adults starting in 2013.

The ads entice young adults with sex and alcohol to bait them into clicking the link and signing up for health coverage.

Here are a couple examples: 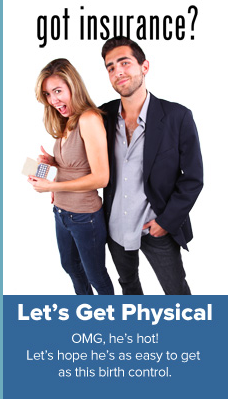 As a father of 3 young daughters, I find the “Let’s Get Physical” ad tasteless and despicable.  To be clear, the message to young ladies here is, “With Obamacare, it’s easy to get birth control, and then it’s time to find a boyfriend to try it on.”

Amidst a lot of complaints, the ads are still running in Colorado.  For the full list of ads, click here: http://doyougotinsurance.com/index.php?id=2

In this commercial created by Beagle Street Life Insurance, while a man is calmly taking a bath, a disturbing gremlin/monster character appears, growling at him and urinates on him, causing him to jump out of the bath.

The voiceover then says, “Life insurance can be a bit of a nightmare.  But Beagle Street is different.  A simple, friendly life insurance service online.” No false advertising or anything predatory here.  Just tasteless and gross.

When you visit a life insurance site, they have to get your information to contact you somehow, right?

A common practice in the life insurance industry is duping visitors into offering their personal information with the promise of showing that visitor some free quotes.

Then, upon submitting personal info such as their name, phone number, and date of birth, the sites don’t show quotes after all. 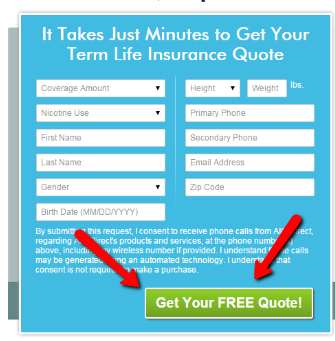 Their site promises a free quote in minutes, but only upon completion do the visitors find out that not only do they not get to see the quotes they expected, but that a representative will have to call them.

Thanks for the "free quote"!

I understand this is an area of semantics.  It does not explicitly say they will see quotes on the next page.  This agency might argue that upon submitting the form, a representative would call right away and give the shopper a quote over the phone... so you see, they ARE getting quotes within minutes.

But this is dubious.  Most people who read their front page expect to see quotes upon submitting their info.

I think it's just plain misleading.

This is one of the reasons we founded JRC Insurance Group… to buck the trend.  At JRC, we offer free life insurance quotes (that are actually displayed on our site) with no personal information required.

I love Gerber and as an agency we represent them, but I must admit I’m not a fan of an ad I recently saw posted by business consultant, Angela Render.

Ms. Render posted a mailer she had received from Gerber.  The envelope shows an image of a baby, with a thought bubble that says, “You love me, right?”  Below the baby, the text reads, “Do something today to show your love now… and for years to come.”

I just can’t understand the emotions they are trying to provoke here.  So if I don’t buy life insurance, that means I don’t love my kids?

What if I can’t afford life insurance, or I have a health concern that disqualifies me from being approved?

I think a more subtle picture of a baby being held by his mother or father, or riding on their back, or looking up to them (anything like this showing a baby’s dependence on her parents) would be much more appropriate here and would be just as effective.

99.9% of Gerber’s advertising is on point, but this marketing piece was a FAIL.

Empire Life is a Canadian insurer who started airing their ‘Dumb Ways to Die’ commercial series in 2014.

While I actually find these commercials quite funny, I’d be mortified if my 7 or 4 year old daughters saw any of them.  Thousands of people have complained they are inappropriately gruesome and morbid.

The commercials show cartoon characters dying in unique and quite terrifying fashion, from setting fire to themselves, getting bitten in half by a grizzly bear, or getting eaten by piranhas.  The point of the commercial is to say that there are many dumb ways to die, but the dumbest way to die is without life insurance.

Insurance carriers need to be more cognizant of what they air.  Imagine young children seeing this.  For example, on Empire Life’s YouTube channel, you can read several outraged parents including this one:

I agree life insurance commercials should be thought provoking, but this one goes too far, and for that reason I say it’s a FAIL.

#8 - Agencies that “Act” Like Another Company in Google Adwords

Similar to what Lisa Group did with the keyword “Malaysian Airlines”, I’ve seen other agencies purchase the keyword “SelectQuote” in Google Adwords.

Clearly the goal here is to impersonate SelectQuote and steal would-be traffic from SelectQuote, directing it to the ad purchaser's site.

In the example below, the title of this company's ad (who is not SelectQuote) is “Select Quotes Online – Get Instant Quotes & Save Money”. 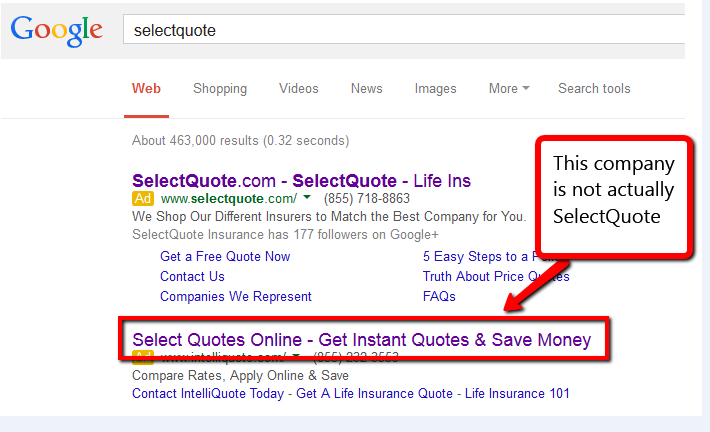 While SelectQuote is a competitor of ours, I don't like to see this being done to them.  They spend hundreds of thousands per year in advertising, so when someone comes to Google and searches for “SelectQuote”, I don’t think it’s ethical for other insurance agencies to buy that keyword and “pose” as if they are SelectQuote.

Thanks to Jeff Root at SellTermLife.com for pointing this one out to me.

Colonial Penn specializes in selling a no exam, guaranteed acceptance policy.  People over the age of 50 can qualify and there are no medical questions.

The problem is it’s expensive, and the commercial hides the cost of the insurance.

So a $20,000 policy would cost $199 per month (that’s $2,388 per year).  The problem with this product is that you have to be in very poor health for it to make sense financially.  After all, if you lived just 10 years, you would have already paid more premiums into the policy than the death benefit is worth.

But that’s not my concern with the ad.

And I’m not the only one who thinks this is shady.  Take a look at this recent comment about them from ripoffreport.com, and I think you’ll agree, the wording is inappropriate and needs to change.

In this TV commercial, a woman enters her parents’ home to find her mother and sister in the kitchen.  She came over to find out about her father’s accident.

The daughters’ mother says he was on a ladder cleaning the gutters when he slipped and hurt his shoulder, but he is ok now.

The daughters then take this opportunity, not to ask more about dad, learn whether he had visited a doctor, or find out about about his whereabouts, but instead, to pitch mom on life insurance for their father.

Perhaps I’m a bit more sensitive to commercials like this since at least once a month, I get a call from a daughter or son trying to purchase a $500,000 policy on their parents who are now in a nursing home or hospice care.  It’s clear they’re trying to capitalize on their parents death.

I also smell “money hungry daughters” in the MetLife commercial.

While I don’t find this ad misleading, it is simply in poor taste.

Do you know of a distasteful or shady advertisement?  Please share in the comments below.

Chris is a co-founder of JRC Insurance Group. Prior to founding JRC, he owned his own agency, and he has been a licensed life insurance agent since 2014. Chris is a die-hard San Diego Padres fan, and in his spare time he enjoys reading, ping pong, poker, and spending time with his wife and three daughters.

Leave your question below and one of our insurance agents will give you a detailed answer.